I feel that I must preface this post, chronicling a brief visit to a truly resplendent National Forest, with a brief tirade against the state in which this beauty resides:  This opinion may not sit well with some of my readers, depending on their affiliation with or affinity for the state, but the author is, on the whole, largely disenfranchised with Oregon.  My most significant grievance with the state, which serves as a similar black mark against the state of New Jersey (the home state of my entire immediate family, save for myself), is the gas pump situation.  I will note that New Jersey’s saving grace is that her landmass is small enough that travelers are able to effectively fuel up in Pennsylvania, New York, or Delaware and avoid this circumstance entirely with a moderately fuel-efficient vehicle.  There is something inherently disconcerting about pulling up to a gas station where, in 48 other fine states, you would be so inclined to get out of your car, swipe a credit card, choose a grade of unleaded fuel, and fill your tank while washing the bugs from your windshield or idly watching passersby, and having a strange man approach your window.  On a road trip as long as my current expedition, which will eventually take me through over 35 states and three Canadian provinces, including a flight out to three different Hawaiian Islands, gassing up my car on a frequent basis is a de facto necessity.  I had momentarily forgotten, therefore, that Oregon had employed such a fallacious policy of disallowing self-service gas stations at the vast majority of fueling depots.  Ignoring the fact that having a complete stranger perform a task you have grown accustomed to executing yourself with regularity is irksome to the 21st Century independent millennial in me, the 20th Century fiscal conservative in me is morally repulsed by the idea of these jobs having been artificially created.  I reiterate that in 48 other states, these jobs are obsolete, and millions of Americans go about their daily lives pumping their own gasoline.  Manufacturing jobs, cashiers, manual labor, and now with the advent of drone delivery, even package carriers are being phased out of the 21st Century economy due to technological advancements, and here we find an example of an archaic occupation not only being artificially perpetuated, but in fact propped up by state law.  Do we still have milk in glass bottles or blocks of ice delivered to our doors?  Are commuter trains still powered by burly men shoveling quantities of coal into fiery furnaces?  Do schoolchildren still risk life and limb operating dangerous machinery in the hard-to-reach crevices of textile mills?  Of course not, as none of those inconveniences are necessary in modern society, nor have they been for generations.

While Oregon’s natural beauty is indeed impressive, particularly along its lush and rugged coastline, it is matched, if not eclipsed, by similar offerings in Washington, just to the north.  Not even Oregon’s lack of state sales tax (also featured in Delaware, of all places) can negate the unmitigable and wholly intolerable annoyance of the government restricting its citizens from pumping fuel they are purchasing with their hard-earned money at marked-up West Coast prices.

Switching gears, Mount Hood National Forest offers a splendid juxtaposition of lush old growth forests, verdant meadows, crystal-clear streams, and one gargantuan snow-capped peak.  From Baker City, OR along the path of solar eclipse totality, my brother-in-law and travel companion Andy and I made the four-plus hour drive to Government Camp, OR (insightful readers may recognize the name of this location as the site of the standoff between disgruntled farmers and authorities two winters ago).  About 45 minutes west of Still Creek Campground, where we spent a solitary night camping next to a remarkably scenic and peaceful flowing stream, the spectral outline of Mount Hood can be discerned through the light cloud cover.  Much like Mount Rainier in Washington, this solitary summit lords over the wilderness like a frosty stone sentinel, informing with a glance that this mountain rules unopposed over the wild dominion surrounding its base. 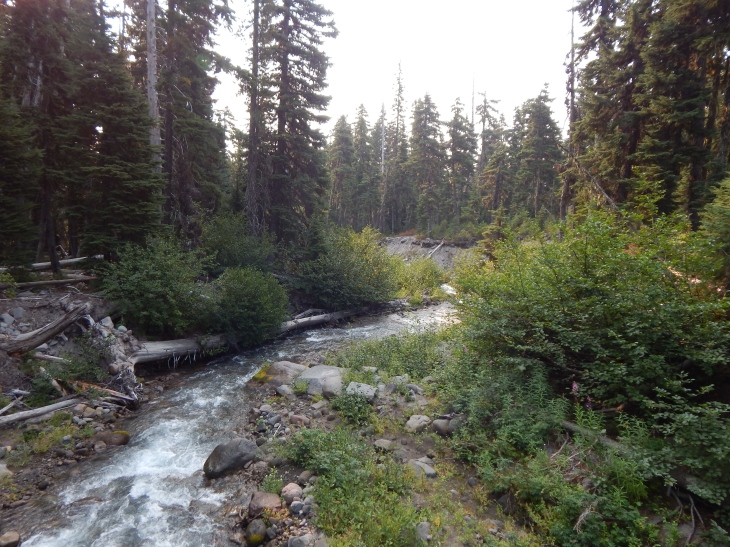 With roughly 24 hours to spend in the National Forest, and very much exhausted from our three days of hiking in Glacier and early morning eclipse outing that same day, we resigned ourselves to retire early and hit the trail the following day.  Having decided upon the 6.8-mile (round trip) Elk Meadows Trail, which the spotty internet access we could muster on our smartphones informed us had exceptional views of Mount Hood from large grassy meadows on the way up a neighboring mountain.  Only a mile or two into the hike, a river crossing threw us for quite a loop, and two East Coast Liberal Arts college educated men spent the better part of an hour searching in vain for signs of the trail.  Perplexed and disappointed, we had only just turned around to retrace the trail to its origin when an older gentleman and his small dog intercepted us and pointed out the (obvious) trail markers indicating that a pile of logs was to serve as the river crossing and that the trail extended back into the forest just beyond.  Forging up the trail with our tails between our legs (me mostly kicking myself for initially glossing over the blatantly marked route), we soon reached the so-named Elk Meadows.

I would be loath to neglect to mention that, while searching for the trail along the riverbank, one of my loud exclamations to Andy startled a magnificent bird of prey roosting on a fallen log about 40 feet upriver.  The eagle, clearly disinterested in being further disturbed by the interjections of an irritating primate such as I, took flight, and I was only able to snap a quick photo of its cool yet determined departure.

What few photographs I endeavored to take failed in their attempts to capture the majesty of these meadows.  The brightly colored wildflowers, tall and unmanicured grass, surrounding treeline, babbling brooks coursing underfoot, and of course, looming Mount Hood, looked for all the world to be a scene out of my young niece’s storybooks.  Desirous of a hot lunch that day, Andy had thought to bring along my portable camp stove and two freeze-dried packet meals (he enjoyed the Beef Stroganoff while I found myself devouring an amazingly satisfying Sweet & Sour Pork with Rice dish), and we munched heartily against the below backdrop: 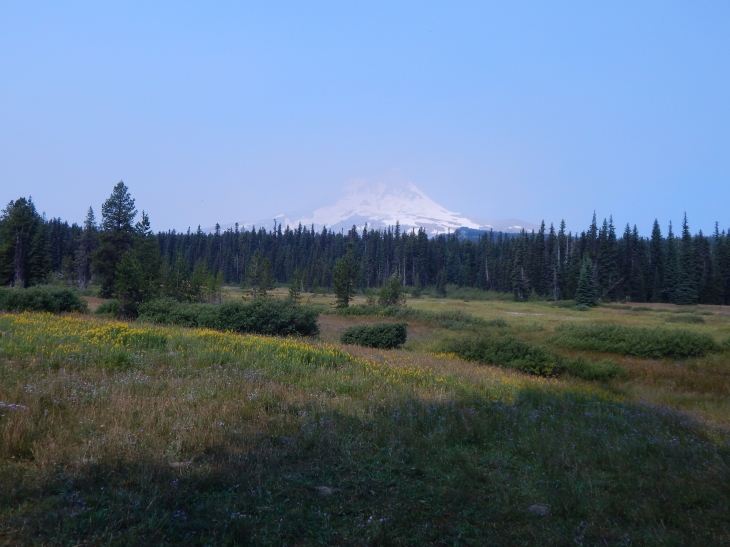 Returning to our car with purpose and rapidity, we departed Mount Hood National Forest with sore legs and full stomachs, making for Portland, where awaited us multiple cheeseburgers at multiple restaurants, an uneasy feeling emanating from the locals downtown, and perhaps the most laughably substandard Super 8 Motel in existence…